My mum becomes some what of a foodie fan-girl whenever Colin Fassnidge makes an appearance on television, so when the time came around to book a restaurant for her birthday lunch, her first choice was naturally, Four in Hand (105 Sutherland St, Paddington). Four in Hand is nestled in the residential street of Paddington and the dining room is further hidden through the pub. We were seated in an intimate dining room with elegant dark wood floors, beneath the giant squid painting. I was excited to dine here as Four in Hand makes the most of their produce through the nose to tail cooking philosophy.

To start, complimentary Iggy's sourdough bread is served, airy and delicious, followed by an amuse bouche of basil, paprika and citrus served in a tiny cup to whet the appetite. Though their menu is on the smaller side, it was hard to decide between the dishes. Luckily between the four of us we managed to cover the most of the menu.
I could not go past the lightly seared bonito with apple and cucumber jelly with a combination of textures, flavours which was all very prettily plated, while the others ordered the beautifully presented sashimi of trout hidden beneath ribbons of radish. I continued with the white meat theme and had the roasted jewfish with deliciously smoky vegetables for a main but was envious of mum's gorgeous piece of beef, bone marrow and delicate onion rings in the most amazing cast iron plate and a side serving of green beans with hazelnut dressing. A combination which I wasn't too sure of was the spanish mackeral with prosciutto and squid gnocchi which was perfect together in an amazing seafood mussel broth while you cannot go wrong with the suckling pig served with a side of the absolutely smoothest and creamiest colcannon, an Irish mashed potato dish with kale. Dessert was an easy decision, the chocolate snickers presented much like a garden of soil of scoops of chocolate mousse ad peanuts dusted with cocoa and sprinkled with micro herbs popping out. For the brother with a peanut allergy, a caramlised ad stewed apple with a refreshing yoghurt popsicle. 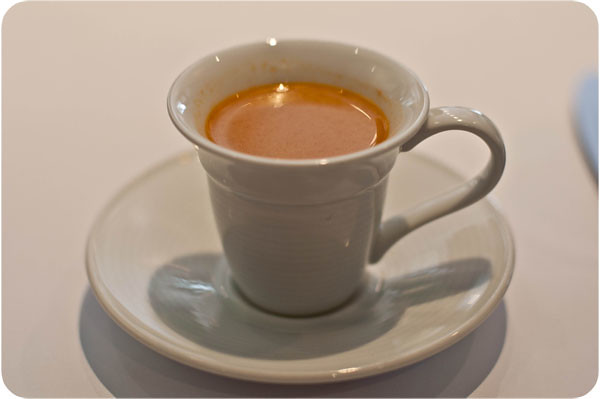 Four in Hand is definitely deserving of the GFG two hats, surprising flavour combinations which worked perfectly and an experience topped off with attentive and warm service. Definitely a place I would love to take Bill for a carnivorous hit and I am sure he would enjoy the braised tender meats and head to tail cooking philosophy. Loved it so much I'll also have to make our way to Four Fourteen soon.